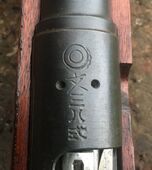 A Type 38 CC rifle, showing the "mon" school marking between the CC and "Type 38" text. Also note the CC mark is over a ground mum
Concentric Circle marked rifles are a true mystery in Japanese rifle collecting. Rather than a chrysanthemum stamped on the barrel of these rifles, there is a mark of concentric circles (CC). Both Type 38's and Type 99's had special series of rifles made with these marks, separate from standard production, usually with their own serial number range. They are often found over neatly ground mums, but often have receivers with no evidence of a mum ever being stamped.

So what is the true meaning of this marking? There are many theories, ranging from rifles made from second hand parts to rifles made for the Kempeitai. One of the more accepted theories is that the concentric circles were used for schools and other non-military institutions. The CC Type 38's especially show classic signs of being used in non-active duty roles, including the "mon" school marking (found right below the circles above the Type 38 script on the receiver, especially on Nagoya made examples), institution markings branded into the stock, and the generally great, often unissued condition these late CC Type 38's are found in.

However, even that is just one theory. Unlike the CC marked Type 38's, the CC Type 99's typically do not show school or other institutional markings. Another argument against it would be the late war last ditch Type 99's found with CC markings. Some would argue the point as to why the Japanese would be setting rifles aside for use in schools/other institutions that late in the war when they were desperate for arms for their active military personnel. However, even at the end of the war rifles would be needed to teach and show function, as the country was being rushed to prepare for the inevitable invasion that was set to occur.